Codifier is proud to display these certifications to their shelf of Partner badges. We were tested on concepts of bidding strategies, location and radius bidding, the important of mobile optimization for websites and mobile applications, different mobile ad formats and most importantly, how to optimize mobile campaigns and measure success.

Codifier believes in establishing strategic partnerships with global leaders in enterprise software and services. This enables us to fully collaborate with and leverage expertise that can bring proven and repeatable value to our customers. Codifier has attained several widely recognized certifications that add further value to our own company, our customers and their projects. We value the inputs received from each technology partner, but we also ensure that an unbiased analysis of our clients’ needs always comes first. Our customer leads the choice of partner solutions without the worry of behind-the-scenes partner collaboration.

Below is a list of our current certifications in both AdWords and Analytics :

I have only one word to say about Codifier Technologies. That is WOW!! Time, Cost, Efficiency, Professional, Cordial are some of the words that strike my mind regarding the App development moments. We are getting a successful number of downloads on both iOS App store as well as Android play store and are expecting more shortly. All due to their sincere efforts. Thank you Team!

If you need sophisticated web design, expert content creation and new and improved look for your organization that brings result, I highly recommend Codifier Technologies. Hat’s off to you guys….. Great job done!

I only have good things to say about Codifier Technologies. I am impressed with the work they have done. The designer listened to my thoughts and suggestions and far surpassed my expectations. I, of course, would love to pass their name on! I look forward to work with Codifier Team in future.

Being in software industry, we know numerous web programmers who are technically savvy, but we struggle to find a company that could truly do it all- web design, content development, social networking and SEO. Then we found Codifier Technologies. They were able to tell our story so much better than we ever could. Codifier has increased the traffic to my site by over 200% in just few months- great work guys!

As ​​an Amazon Web Services Consulting and Reselling Partner we accompany our clients on their way to the Cloud and help them making their business flexible, scalable and cost effective.

Microsoft released its adCenter certification process in 2007, when its main search engine was live.com. Live.com displayed its pay per click cads as did various other Microsoft-owned properties and partners. Live.com was replaced with bing in the middle of 2009. Bing received a much larger advertising push than live.com ever did – including a very expensive, yet very brief campaign with Jerry Seinfeld. At that time, the platform was known as Microsoft adCenter. In September 2012 it became Bing Ads.

The most distinguished certification a company can hold comes from the largest paid search provider and search engine in the world: Google. We are proud to have been recognized within their AdWords program for our knowledge and account management as a Google Partner.

This certification demonstrates proficiency in mobile advertising, including ad formats, bidding and targeting, and campaign measurement and optimization.

The Video Advertising demonstrates basic and advanced concepts, including best practices for creating, managing, measuring, and optimizing video advertising campaigns across YouTube and the web.

Codifier's intelligent mobility and modern-day web technologies help businesses thrive with a nimble and dynamic presence. We make a business grow to be more productive and more efficient 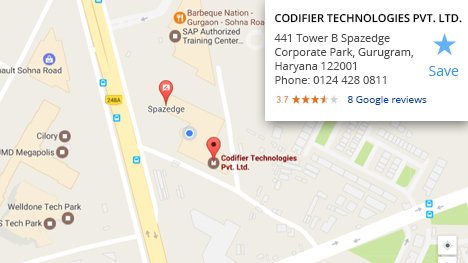